Rhabdomyosarcoma (RMS) is a childhood cancer originating from skeletal muscle, and patient survival is poor in the presence of metastatic disease. Few determinants that regulate metastasis development have been identified. The receptor tyrosine kinase FGFR4 is highly expressed in RMS tissue, suggesting a role in tumorigenesis, although its functional importance has not been defined. Here, we report the identification of mutations in FGFR4 in human RMS tumors that lead to its activation and present evidence that it functions as an oncogene in RMS. Higher FGFR4 expression in RMS tumors was associated with advanced-stage cancer and poor survival, while FGFR4 knockdown in a human RMS cell line reduced tumor growth and experimental lung metastases when the cells were transplanted into mice. Moreover, 6 FGFR4 tyrosine kinase domain mutations were found among 7 of 94 (7.5%) primary human RMS tumors. The mutants K535 and E550 increased autophosphorylation, Stat3 signaling, tumor proliferation, and metastatic potential when expressed in a murine RMS cell line. These mutants also transformed NIH 3T3 cells and led to an enhanced metastatic phenotype. Finally, murine RMS cell lines expressing the K535 and E550 FGFR4 mutants were substantially more susceptible to apoptosis in the presence of a pharmacologic FGFR inhibitor than the control cell lines expressing the empty vector or wild-type FGFR4. Together, our results demonstrate that mutationally activated FGFR4 acts as an oncogene, and these are what we believe to be the first known mutations in a receptor tyrosine kinase in RMS. These findings support the potential therapeutic targeting of FGFR4 in RMS. 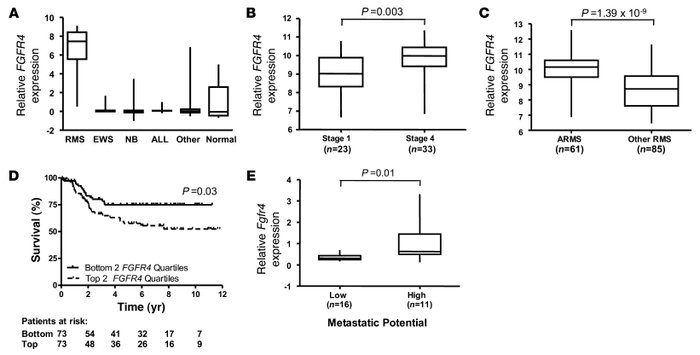